CBD products have taken the market by storm. Since you have clicked on this article, you are wondering what could possibly be the difference between Hemp vs Marijuana.

If so, you bet you have come to the right place. Now there is a lot of controversy surrounding CBD and whether or not it is the same as Marijuana. People all around the world want to know Hemp vs Marijuana.

As a CBD enthusiast, I will be telling you the key differences between Hemp and Marijuana, the little things you need to know about both of these things.

The rising popularity of CBD has turned quite a lot of heads of the normal public, let alone recreational and medical users. If you have been following TheCBDmagazine.net, then you probably already know that we post about CBD products and try to debunk the popular myths in regard to CBD products.

So without wasting any more time, let us get started.

What Does The Term ‘Hemp’ Mean?

In simple words, hemp is the cannabis that contains 0.3% or less THC in it by dry weight. Now you must be wondering why 0.3%, well according to Earnest Small, 0.3 is an arbitrary figure and that there is no exact way of distinguishing CBD from THC.

And furthermore, 0.3% is the legal limit of THC in America according to its Agricultural Act of 2018. Since the concentration of THC is so low in hemp, you will not get the intoxicating high that you get while consuming Marijuana. This is one of the basic differences you need to know in learning Hemp vs Marijuana.

What Does The Term ‘Marijuana’ Mean?

Marijuana is the conventional weed that you smoke to get high. I bet you have smoked your fair share of pot back in your college days. There is no shame in it; we have all done it.

The term marijuana is also synonymous with weed. THC is one of the main chemicals of the Cannabis sativa plant. But do you know when cannabis was first founded in America, the term ‘marijuana’ did not exist?

Back in 1910 and 1920, when the Mexicans started to seek shelter in America because of the Mexican Revolution, anti-Mexican sentiment started to rise among the white Americans, and the term ‘marijuana’ was formed to put the Mexicans in a bad light due to the prevailing negative sentiments against Mexican refugees.

This is also a major difference between Hemp vs Marijuana.

What Are The Key Differences Between Hemp vs Marijuana? 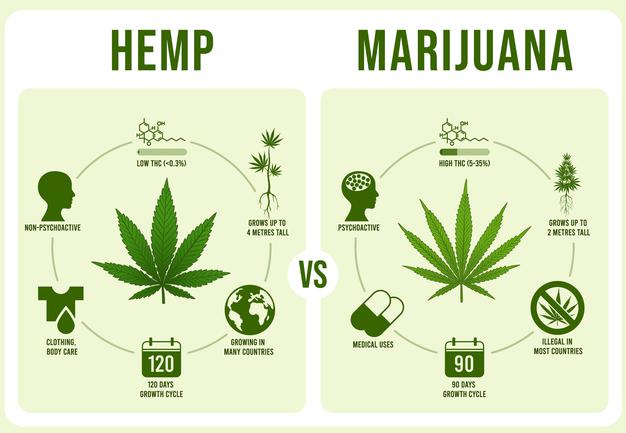 1. Legality Of Hemp vs Marijuana

The legality depends on the country of your origin. Many countries in the western hemisphere have legalized weed a long time back, whereas a bunch of countries has banned weed recently. If you are from America, then hemp and Marijuana are regulated under different laws.

Hemp was considered to be illegal under the previous law of the Controlled Substance Act of 1970. It was strictly controlled and regulated under the old law.

However, things have changed for CBD enthusiasts in the present time since the new Agricultural Act of 2018 has legalized hemp and hemp-derived products. But the only thing is the concentration of THC in hemp products has been restricted to 0.3%.

Like I already mentioned before, in order to learn the difference between Hemp vs Marijuana, you need to have a clear idea of the composition of these two products.

Both hemp and Marijuana produce CBD in high content. However, the formation of THC depends. CBD and THC are the two most popular chemicals of the Cannabis plant.

Hemp contains less than 0.3% THC, whereas Marijuana contains THC up to 30%. This is a major difference between hemp vs Marijuana.

3. Cultivation Of Hemp vs Marijuana

In order to grow Marijuana, the weed grower needs to pay close attention to all the specificities. Help is basically cultivated to get the most out of it and for maximizing its size, which is exactly why hemp is cultivated in open fields where there is enough sunlight.

4. Usage Of Hemp vs Marijuana

Both of these products are used for different purposes. Marijuana is mainly used by people recreationally to get high.

This high is an intoxicating feeling where everything seems to slow down, food tastes better, your appetite increases. This feeling lasts for about 5 hours. Marijuana is also used for medical purposes.

Hemp, on the other hand, is used to producing products like paper, clothing, plastic, CBD oil, and CBD infused topicals.

The negative sentiments that once arose are still not suppressed. The use of marijuana-derived products is mainly done by people of the lower section of society.

Marijuana is known to induce violence, lust, crime, paranoia, hate, shame, and despair. There is still a lot of research scientists need to conduct in order to find the truth.

Final Thoughts On Hemp vs Marijuana

There you have it; I hope now you know the key differences between Hemp vs Marijuana.

In the end, I would like to conclude by saying that before indulging in consuming these kinds of products, you need to be well versed with the laws of the nation or state you are living in.

In the United States, even hemp products containing less than 0.3% THC are banned in Texas. We hope you have found this article CBD product has a lot of potentials, and soon nations will start to acknowledge it, but till that time, we are going to have to wait.

Girl Scout Cookies Strain: Everything You Need To Know And More!

How To Grow Weed At Home: A Step-By-Step Guide

Want To Know How Much Does A Pound Of Weed Cost? Click Right Here!